Dieting with the Wandering Glutton

Posted on March 19, 2012 by wanderingglutton 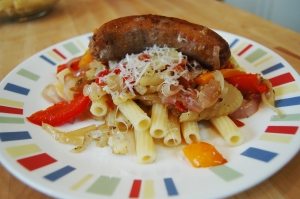 Perhaps claiming a moniker that includes the word glutton may not have been the best idea. Over the past five years I have been doing the things that the doctor didn’t really want me to do, i.e., eating too much and exercising too little. Since it is Lent and I have some time to reflect on what I am doing, I decided to try the South Beach Diet with my wife. We both figured that having the other to rely on would help to stay motivated.

All I can say about Phase One of the South Beach Diet is, “WOW!!!” The results were fantastic (~9 lbs. in nine days), but by Day Eight I was so irritable and short-fused, I knew I had to figure out an alternative. In addition to my terrible mood, I had no energy to do anything.

Previously, I have successfully changed my eating habits by preparing meals from the Eat What You Love & Lose cookbook. The chefs in the test kitchen of Family Circle magazine wrote this cookbook and followed the eating plan to prove that it worked. It essentially is a calorie counting diet, but it teaches how to focus on portion size and not have to focus on the calories themselves.

Tonight, I made Baked Turkey Sausage and Peppers with Fennel. This is a take on the traditional sausage with peppers and onions. The fennel adds more bulk to the sauce, as well as a very mild anise flavor.

The recipe calls for heating 2 tablespoons of olive oil in a roasting pan in a 425 degree oven. While the oil heats, core, seed and slice 4 bell peppers (your choice of colors), halve 2 large onions and slice them into 1/4 inch thick slices, trim and thinly slice 1 fennel bulb, and finely chop 5 cloves of garlic. Add these vegetables to the oil, along with 2 teaspoons of dried oregano, 1/2 teaspoon of salt and 1/4 teaspoon of black pepper and bake for 15 minutes.

While the vegetables are baking, saute 6 turkey sausages (pierce the skins to release the juices) in a nonstick skillet over medium-high heat. Cook the sausages until they are browned on all sides (~10 minutes). Also, core, seed and finely chop 1 large ripe tomato.

Serve the vegetables over pasta (I chose rigatoni). A serving of uncooked pasta is 1/2 a cup. With the vegetables and sausage over the top, it makes a nice plate. To finish the dish, I grate a small amount of pecorino-romano cheese. One serving of this very filling dish, pasta included, has 342 calories.

2 Responses to Dieting with the Wandering Glutton

Hanging Out with Teacher Patti

Sweet Precision
next stop: tbd
The London Review of Sandwiches