Posted on May 6, 2015 by wanderingglutton

Today I decided to try out Ann Arbor’s newest food truck, Ricewood BBQ. I read the press report about their successful opening day (completely sold out in an hour and 40 minutes), so I knew that if I wanted my choice of items from the menu I would need to arrive early.

Just before noon I pulled into the parking lot behind Morgan & York, 1928 Packard Road. The first thing I noticed was the large, black food truck with a few people milling about. Next thing I saw was the pile of wood and the shiny smoker, ejecting a billowing column of smoke from its chimney.

Promptly at noon, the truck’s window popped up and they were open for business. The line was just long enough that I could see the menu and decide what to order. I am a sucker for good beef brisket, so I opted for the Brisket Ricebowl. For my wife, I got the Pork Shoulder Ricebowl. Both came with a side of marinated cucumber and I asked for the Fina’dene sauce on the side (spicy for me and gringo for my wife). Since I was taking my order home I did not order a drink, though I was tempted by the Kool-Aid of the day.

When I got home and opened the containers, I noticed that the aroma was slightly smokey with a hint of sweet. I sampled a couple bites of the pork shoulder, but saved most of my appetite for the brisket. I am of the school of thought that good BBQ does not require sauce, so the fact that the pork shoulder came with sauce initially made me leery. The menu did reveal that the pork came served wet, so I wasn’t surprised by the sauce and I discovered that it was the source of the sweetness that I had smelled. The pork was very moist and had decent flavor that the sauce did not dominate.

Turning my attention to the brisket, I saw that had a prominent smoke ring and nice layer of bark on the edge of each piece. After tasting a bite on its own, I tried dipping a bite in the spicy Fina’dene sauce. The Fina’dene gave it a good bit of heat, with a nice combination of tart vinegar and tangy soy sauce. I thought that would be a good topping for the pile of rice and it was. The brisket had more smokiness than the pork and was nicely seasoned with salt and pepper. I did reserve a couple bites to try with my own homemade BBQ sauce and that worked well too. The marinated cucumbers were a great addition to the ricebowls, providing something nice and crunchy to go along with the tender meat and sticky rice.

I have never experienced Chomorro, Pacific Island-Style BBQ before today. The flavors of the Ricewood BBQ were different than what I have ever tried before, but I really enjoyed them. It is not your typical BBQ joint and that is a good thing. I look forward to going back again and trying the ribs. 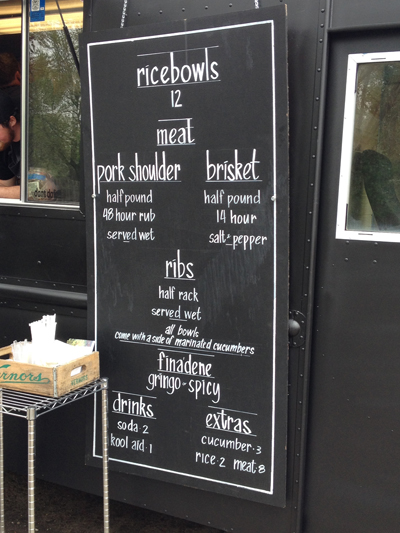 Sweet Precision
next stop: tbd
The London Review of Sandwiches