A New York Weekend, Day One

Posted on March 16, 2016 by wanderingglutton

A couple weeks ago, I made a road trip to New York City to help with the Charcuterie Masters competition. Considering my fellow road trippers (fellow members of The Salt Cured Pig, John Patterson and Jason Osburn) and I were only there from early Friday morning until Sunday evening, we took full advantage and crammed in as many great opportunities to eat great food and talk with great people about food. Due to the volume of activities, I will be splitting my recounting of this trip into three separate posts.

After driving for 12 hours and well into the early hours of Friday, we crashed with great expectations for the morning. We were staying in a hotel a couple doors down from the venue for the Charcuterie Masters event (Flushing Town Hall), right in the heart of Flushing. Once we were all awake and ready for the day, we decided to walk over to the venue and get a lay of the land.

While walking over there, we immediately noticed that everyone else on the sidewalk was looking at us a bit oddly. We definitely stuck out in this neighborhood, as all the people we encountered were Asian. After seeing the exterior of the Flushing Town Hall, we wandered into the market next door.

Immediately upon walking in to the market, we were met with a distinct odor of fresh seafood. When I say fresh, I mean that most of it was still alive. It was amazing to see the variety, from spider crab to geoduck to rather large sea snails. We walked around the produce section and found the usual fruits and veggies you would expect, as well as Jackfruit and Durian. We have a few Asian markets around Ann Arbor, but this one had a greater volume of items as well as a much more diverse selection. We were in a food lover’s heaven thinking of all the possibilities.

After meeting some of the other members of The Salt Cured Pig who were in town for the Charcuterie Masters event, we made our way to the Gowanus area of Brooklyn. Our destination was Fletcher’s Brooklyn BBQ. John knew Pitmaster Matt Fisher who provided a spread of some of the best BBQ and sides that I have ever had.

We shared a couple of Fletcher’s Platters and sampled the Beef brisket, Beef burnt ends, a house recipe Hot link, Beef tri tip,  and Pork char siu. As a fan of brisket, I expected great things, just due to the fabulous aromas, and I was not disappointed.

The brisket was lean and sliced thin, allowing the flavor of the meat to stand up well to the flavor of the smoke. The burnt ends packed a huge punch of smokey goodness that offered a great counter to the spice rub that featured a nice dose of black pepper. The Hot link was juicy and seasoned well with paprika and some ground hot peppers. Matt even surprised us with cheese burgers topped with mornay sauce that he cooked in a cast iron skillet right in the firebox of his smoker.

The tri tip was a cut that I had never tried before and I think it may have been my favorite. It was sliced thin like the brisket, but its texture was much more tender due to the marbling of fat throughout each morsel. It had a significantly more delicate smoke flavor and barely required me to chew due to its tenderness.

The char siu was another cut I had never tried previously. It appeared to be from a pork shoulder and was sliced a bit thicker. Each slice had a ribbon of fat that separated two lean very lean bites. The pork had a light smokey flavor that pared well with the tangy and slightly sweet sauce that accompanied it.

The sides we sampled were all house made and included corn bread, pickled cucumbers, pickled peppers, potato salad, pit smoked beans and collard greens. The corn bread was sweet, as expected north of the Mason-Dixon line. I enjoyed using it to cleanse my palate between each of the other dishes. After tasting each of the meats on their own, I made little finger sandwiches using the pickled veggies to top each bite. The potato salad was just the way I like it, employing a generous amount of yellow mustard to bind and flavor it.

Baked beans are one of my favorite BBQ sides. I usually expect a slightly sweet flavor and somewhat gooey texture in the beans’ sauce. These beans had a very meaty flavor and the sauce was almost more like gravy than syrupy stickiness.

The best of the sides was the collard greens. I am typically not a big fan of them because they are over-cooked and under-seasoned, so they are nothing more than a pile of mush. These were seasoned with some of the smoked meat and retained some texture so I had to actually chew them. This allowed me to savor each bite. 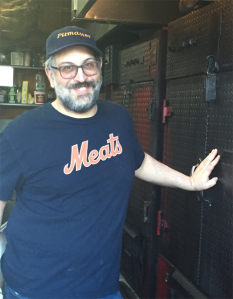 We hung out and chatted with Matt for a while after we finished gorging ourselves and then I determined that I needed a bit of caffeine if I was going to make it through the evening. Immediately next door to Fletcher’s BBQ, we found the Four & Twenty Blackbirds Pie Shop. I had seen a segment of a the show Unique Sweets on the Cooking Channel that featured the pies from this shop, so I felt obligated to try something. I couldn’t eat another bite of anything at that moment, so I got my espresso and a slice of salted caramel apple pie to go. (Kept in the refrigerator of the hotel room, the slice of pie made an excellent breakfast the next morning.)

At this point we left the Gowanus neighborhood and made our way to Cobble Hill. Along the historic Brooklyn waterfront, we found Pok Pok. Pok Pok serves cuisine from northern Thailand and has earned a Michelin star in 2014 and 2015. I am a novice regarding Thai food and did not really know what to expect.

We ordered three dishes to split, a spicy and sour glass noodle salad with mussels and sour pork sausage, a spicy chopped duck salad with duck liver and skin and a sweet pork belly and pork shoulder curry. Each of the dishes was unique and flavorful, but the consensus favorite was the glass noodle salad. The combination of elements in the dish melded together perfectly, with none overpowering any of the others. The sausage added a bit of richness that kept the dish from being too spicy, while dried shrimp and fish sauce contributed a subtle saltiness. The pickled garlic gave hits of sour and the shallots and carrots brought a bit of natural sweetness. It was one of the best things I ate all weekend and I would go back just to have another serving of it.

As we left Pok Pok and returned to our hotel in Flushing, I thought I had consumed all I could possibly eat. Fortunately, I was wrong. We met up with several other members of The Salt Cured Pig at the New York Food Court. One of those we met was Michael Pardus, a faculty member at the Culinary Institute of America who has spent a substantial amount of time in Asia and is one of the Asian Cuisine instructors.

As surreal as it was walking down the street and in the market in Flushing, the New York Food Court raised that feeling to another level. As we walked into the building, we encountered a large open space with tables lined up like the food court of a mall. What made the scene different was that the neon signs adorning each of 30 or so food booths were composed of characters of Chinese, Japanese or Korean alphabets. 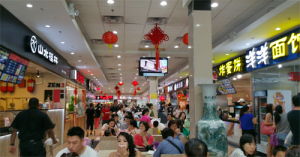 The smells were intoxicating and there were so many choices that it was extremely difficult to decide what to try. Michael made his selection by which booth had the smell of something familiar. He had a dish of spicy intestines and noodles. I tried a couple bites of it and determined that while the texture was very appealing, I was sure I tasted a hint of the previous contents of those intestines (purely psychological, I am sure).

I found a booth that sold hand pulled noodles and was temporarily mesmerized by the routine of the cook handling the dough and pulling the noodles. I am a big fan of noodles anyway, but knowing that I would be getting noodles that I could watch them make sealed the deal for me. I chose a bowl of them with beef tendon and bok choy in a beef broth. The noodles were tender and I thoroughly enjoyed them, but more impressive was the richness of the broth and the discs of beef tendon that practically melted when I place them on my tongue.

Thinking back, it is difficult to believe that we were able to pack that many food experiences into a single day. Be sure to come back to read about day 2 and day 3 of this food adventure.

1 Response to A New York Weekend, Day One

Sasha's Adventures In...
commute to broadway

Hanging Out with Teacher Patti

Where flour, butter, and sugar collide

next stop: tbd
The London Review of Sandwiches

The Daily Sampler
The Food and Wine Hedonist

leave your inhibitions at the door